A PDL event occurs when the storage array issues a SCSI sense code indicating that the device is unavailable. A good example of this is a failed LUN, or an administrator inadvertently removing a WWN from the zone configuration. In the PDL state, the storage array can communicate with the vSphere host and will issue SCSI sense codes to indicate the status of the device. When a PDL state is detected, the host will stop sending I/O requests to the array as it considers the device permanently unavailable, so there is no reason to continuing issuing I/O to the device.
All Paths Down (APD)
If the vSphere host cannot access the storage device, and there is no PDL SCSI code returned from the storage array, then the device is considered to be in an APD state. This is different than a PDL because the host doesn’t have enough information to determine if the device loss is temporary or permanent. The device may return, or it may not. During an APD condition, the host continues to retry I/O commands to the storage device until the period known as the APD Timeout is reached. Once the APD Timeout is reached, the host begins to fast-fail any non-virtual machine I/O to the storage device. This is any I/O initiated by the host such as mounting NFS volumes, but not I/O generated within the virtual machines. The I/O generated within the virtual machine will be indefinitely retried. By default, the APD Timeout value is 140 seconds and can be changed per host using the Misc.APDTimeoutadvanced setting.

vSphere HA can now detect PDL and APD conditions and respond according to the behavior that you configure. The first step is to enable VMCP in your HA configuration. This settings simply informs the vSphere HA agent that you wish to protect your virtual machines from PDL and APD events. In the spirit of keeping things dead simple, it’s as easy as a clicking a checkbox.
Cluster Settings -> vSphere HA -> Host Hardware Monitoring – VM Component Protection -> Protect Against Storage Connectivity Loss. 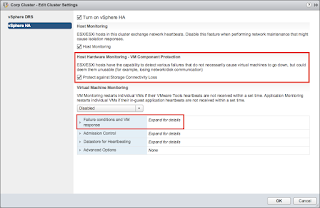 The next step is configuring the way you want vSphere HA to respond to PDL and ADP events.  Each type of event can be configured independently.  These settings are found on the same window that VMCP is enabled by expanding the Failure conditions and VM response section. 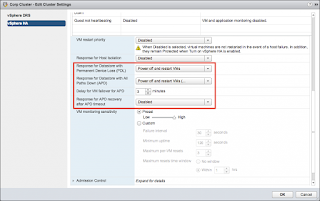 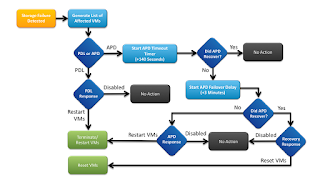 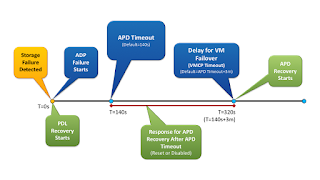 T=0s: A storage failure is detected. VMCP will start the recovery workflow.
T=0s: For a PDL event, the recovery process immediately starts. VMs will be restarted on healthy hosts in the cluster.
T=0s: For an APD condition, the APD Timeout timer starts.
T=140s: The host declares an APD Timeout and will begin to fast fail non-virtual machine I/O to the unresponsive storage device. By default, this is 140 seconds.
T=320s: The VMCP Timeout.  This is 3 minutes after the APD Timeout has been reached. vSphere HA will start the APD recovery response.
T=140s-T=320s: The period after an APD Timeout, but before the VMCP Timeout. VMs may become unstable after losing access to storage for an extended period of time. If an APD is cleared in this time period, the option to reset the VMs is available.
Refer – VMware Walk-through