The ability to hot-swap traditional storage devices such as SATA and SAS hard disks on a running vSphere host has been a huge benefit to systems administrators in reducing the amount of downtime for virtual machine workloads. Solid-state disks (SSDs) are becoming more prevalent in the enterprise datacenter, and this same capability has been expanded to support SSD devices. Similarly as with SATA and SAS hard disks,users are now able to hot-add or hot-remove an SSD device while a vSphere host is running, and the underlying storage stack detects the operation. 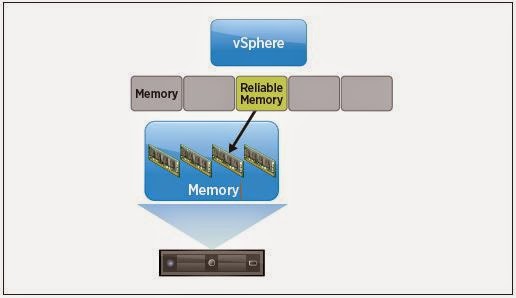 In vSphere 5.1 and earlier, the balanced policy for host power management leveraged only the performance state (P-state), which kept the processor running at a lower frequency and voltage. In vSphere 5.5, the deep processor power state (C-state) also is used, providing additional power savings. Another potential benefit of reduced power consumption is with inherent increased performance, because turbo mode frequencies on Intel chipsets can be reached more quickly while other CPU cores in the physical package are in deep C-states.

vSphere 5.5 introduces a new virtual machine compatibility with several new features such as LSI SAS
support for Oracle Solaris 11 OS, enablement for new CPU architectures, and a new advanced host controller interface (AHCI). This new virtual-SATA controller supports both virtual disks and CD-ROM devices that can connect up to 30 devices per controller, with a total of four controllers. This enables a virtual machine to have as many as 120 disk devices, compared to the previous limit of 60.

vSphere 5.1 was the first vSphere release to provide support for hardware-accelerated 3D graphics—virtualshared graphics acceleration (vSGA)—inside of a virtual machine. That support was limited to only
NVIDIA-based GPUs. With vSphere 5.5, vSGA support has been expanded to include both NVIDIA- and
AMD-based GPUs. Virtual machines with graphic-intensive workloads or applications that typically have
required hardware-based GPUs can now take advantage of additional GPU vendors, makes and models. See the VMware Compatibility Guide for details on supported GPU adapters.

There are three supported rendering modes for a virtual machine configured with a vSGA: automatic, hardware and software. Virtual machines still can leverage VMware vSphere vMotion technology, even across a heterogeneous mix of GPU vendors, without any downtime or interruptions to the virtual machine. If automatic mode is enabled and a GPU is not available at the destination vSphere host, software rendering automatically is enabled. If hardware mode is configured and a GPU does not exist at the destination vSphere host, a vSphere vMotion instance is not attempted. With vSphere 5.5, graphic acceleration is now possible for Linux guest OSs. Leveraging a GPU on a vSphere host can help improve the performance and scalability of all graphics-related operations. In providing this support, VMware also is the first to develop a new guest driver that accelerates the entire Linux graphics stack for modern Linux distributions. VMware also is contributing 100 percent of the Linux guest driver code back to the open-source community. This means that any modern GNU/Linux distribution can package the VMware guest driver and provide out-of-the-box support for accelerated graphics without any additional tools or package installation.

The following Linux distributions are supported:

vCenter Single Sign-On server 5.5, the authentication services of VMware vCloud Suite, has been greatly
enhanced to provide a richer experience that enables users to log in to vCloud Suite products in a true
one-touch, single sign-on manner. This feature provided challenges for users in a previous release. As a result
of extensive feedback, the following vCenter Single Sign-On enhancements have been made:

A single installation model for customers of all sizes is now offered.

cross-domain authentication with one- and two-way trusts common in multidomain environments.

Built from the ground up, this architecture removes the requirement of a database and now delivers a multimaster authentication solution with built-in replication and support for multiple tenants.

The platform-agnostic vSphere Web Client, which replaces the traditional vSphere Client™, continues to exclusively feature all-new vSphere 5.5 technologies and to lead the way in VMware virtualization and cloud management technologies. Increased platform support – With vSphere 5.5, full client support for Mac OS X is now available in the vSphere Web Client. This includes native remote console for a virtual machine. Administrators and end users can now access and manage their vSphere environment using the desktop platform they are most comfortable with. Fully supported browsers include both Firefox and Chrome.

Improved usability experience – The vSphere Web Client includes the following key new features that improve overall usability and provide the administrator with a more native application feel:
• Drag and drop – Administrators now can drag and drop objects from the center panel onto the vSphere inventory, enabling them to quickly perform bulk actions. Default actions begin when the “drop” occurs, helping accelerate workflow actions. This enables administrators to perform “bulk” operations with ease.
For example, to move multiple virtual machines, grab and drag them to the new host to start the
migration workflow.
• Filters – Administrators can now select properties on a list of displayed objects and selected filters to meet specific search criteria. Displayed objects are dynamically updated to reflect the specific filters selected. Using filters, administrators can quickly narrow down to the most significant objects. For example, two checkbox filters can enable an administrator to see all virtual machines on a host that are powered on and running Windows Server 2008.
• Recent items – Administrators spend most of their day working on a handful of objects. The new recent items navigation aid enables them to navigate with ease, typically by using one click between their most commonly used objects.

Enabling Protection for an Application Service